This section contains definitions for the terms used in glass making and in the description of glassware. There are links to other sections to help expand upon and provide illustrations of the terms used.

This section is not as comprehensive as the source texts that are available and these should be consulted for further details. References are shown in bold and links are in blue.

A B C
Aalto, Alvar. (1898-1976) Finish architect and designer who worked with Iittala Glassworks.

acid etching. A wax or shellac resist is used over the body of the glass. A pattern is cut into this and hydrofluoric acid is then applied. The acid is sometimes thickened. In the areas where the wax has been removed the acid dissolves the glass leaving the desired pattern. This can be a multistage process and be used to produce a decorative surface finish or areas in high relief. (see cameo)

acid polishing. An item is dipped into a mix of hydrofluoric and sulfuric acids which produces a glossy polished surface. Originally patented by Richardson.

Aesthetic movement. An artistic movement of the late 19th century in England. Famous adherents include Beardsley, Wilde and Whistler. They followed the doctrine of “art for art’s sake”; essentially art was concerned with beauty rather than reinforcing Victorian moral values. A short lived movement overtaken by the Arts and Crafts and Art Nouveau movements. The decorative arts, particulary ceramics and furniture were influenced by Chinoiserie and Japonisme. Glass influenced by this movement shows surface decoration and form influenced by Far Eastern designs. Baccarat perhaps produced some of the best examples of this influence.

air trap. Trapped pockets of air between two layers of glass. This is sometimes used to create regular patterns.

Anneal. The differential heating and cooling of a glass object during manufacture can cause internal stresses and strains to develop. The final form of the object is "annealed" by bringing it to the annealing temperature and then slow uniform cooling in an annealing oven. Incorrect annealing results in small, sometimes internal cracks to develop with time and temperature variation. These are stress or strain fractures.

Appert Freres. Major 19th century glass manufacturer in Paris. Adrien and Leon Appert were innovators. They were innovative and technically adept. They were known to consult for Galle amongst others.

Applied decoration or applications. The attachment of hot glass decorations to the body of a glass object. Typically trails, flowers and prunts.

Art Deco. The Art Deco style covers roughly a twenty year period between the 1st and 2nd World Wars. The term 'Art Deco' was coined much later, in the 1960's by the critic Hillier. The style of this time was named after the "Exposition Internationale des Arts Decoratifs et Industriels Modernes" held in Paris in 1925. Rather like the Art Nouveau movement it encompassed a wide range of styles, however Deco styles are generally clean and sleek. A period that saw the development of mass produced lower quality glass.

Art Nouveau. Perhaps the first decorative style which crossed national boundaries and united architects, artists and designers. The stylistic influences began in the 1880's. Art Nouveau, the term used in English and French, was named after Samuel Bing's Paris gallery which opened in 1895. The style reached its height at the start of the 20th century. There were a number of decorative forms. French styles concentrated on sinuous lines and “whiplash” curves, a form which was eventually over used. Nature and the female form were used as decorative motifs. French glass design centred on Nancy. The German version was called Jugendstil (or youth-style), and was more restrained and geometric. This more rigid theme defined the Glasgow School developed by the Macdonald sisters, Mackintosh and McNair. The austere theme carried into Vienna. Most surprisingly the Italian form, Stile Liberty (after the London retailer), was not creatively supported by the Venetian glassblowers. By the start of the First World War the style had fallen out of favour.

Arts and Crafts Movement. The Arts and Crafts Movement rejected the ornamentation of high Victorian style. William Morris led the movement which aimed to emphasise the skill and honesty of handmade items to the maker and the general public. It coincided with the Art Nouveau movement with which it shared stylistic but not ethical themes. Ironically the production could only be afforded by the middle class so was ultimately self defeating. It was however a glorious failure! In England, Philip Webb and T. G. Jackson produced notable designs for Morris which were produced by James Powell (Whitefriars).

Assistant. A glassworker(s) that assists the Gaffer.

at-the-fire. This is the re-heating of an object at the glory hole.

Aurene Glass. Stannous chloride or lead chloride is sprayed on the glass and then reheated to produce an iridescent sheen. Developed by Carder in 1904.

Aventurine. A solid-in-solid dispersion of, typically, copper particles in glass in order to produce gold flecks. 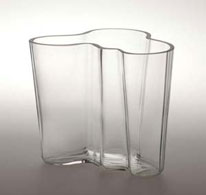 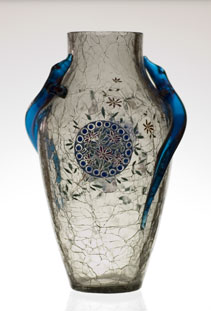 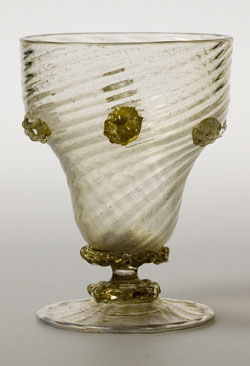 An early Venetian glass with applied threads around the base and applied prunts to the body. 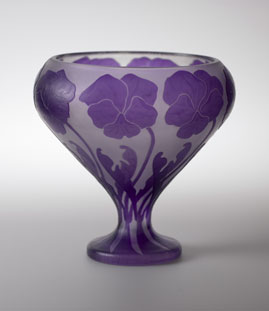